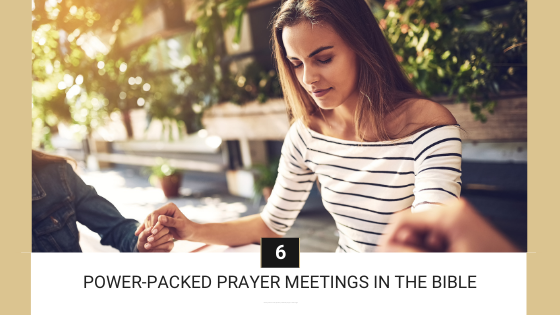 I was writing my weekly Soul H2O Devotion about how God Still Answers Our Prayers and it started getting toooooo long, so I decided to make this another post to just include these incredibly inspiring stories! I’m hoping you’ll possibly use this post as a Bible Study to help increase your faith.

6 Power-Packed Prayer Meetings In The Bible

This corporate prayer meeting (vs. 10) resulted in an angelic visitation followed by the miraculous conception and birth of John the Baptist to a woman past menopause!

At Jesus ascension, his last words of instruction to his disciples (both men & women) were to stay and pray; waiting for the power of God to come on them to witness through the power that would come from the baptism of the Holy Spirit.  And boy did it come!  The believers praying in the Upper Room received the baptism and began speaking in tongues, which caused such a stir in the town that it led to Peter began to walk into his destiny and began to preach.  About 3000 people got saved that day alone (Acts 2:41) and the church moved forward in boldness and power!

When Peter & John were on their way to prayer meeting (vs.1) they saw a man who couldn’t walk. In boldness, they were used by God to see the man miraculously healed and then Peter spoke boldly and told every there for the prayer meeting about Jesus.

When Peter & John were brought before the authorities and threatened not to continue preaching about Jesus, the church got together and prayed for boldness to testify more about Jesus.  It says that when they prayed the place shook and they were all filled with the Holy Spirit and went out to speak the word boldly!

When Peter was thrown into prison, the church began praying at John Mark’s house for him (vs. 3).  Miraculously, the angel of the Lord visits Peter in jail and sets him free!  Peter’s chains literally fell off when he began to move forward as the angel said.  I think this is the only sleep-walking miracle in the Bible (vs.11) 🙂 Peter runs to John Mark’s house where they’re all praying for him and when Rhoda hears Peter’s voice at the door she’s so shocked that she leaves him standing outside waiting while they all argue that it couldn’t be Peter!  Oh, I wish we weren’t like this; doubting God’s answers to what we’ve prayed about.

This two-person prison prayer & praise meeting resulted in the miraculous release of Paul and Silas’ from jail.  The Bible records that when they prayed together it caused an earthquake that broke open their shackles and those of all the prisoners!  How crazy is that!  When the Jailer woke up he feared the prisoners had all run away and was going to kill himself before the Romans killed him.  Paul calls out and lets him know they were all there.  Paul proceeds to boldly witness about Jesus to the jailer whose whole family comes to faith in Christ! Next, the authorities come and personally escort Paul and Silas out of jail and they went straight to Lydia’s house to see the brothers. Could they have been holding a prayer meeting too?  We’ll never know until heaven.  One of the many questions I’ll be asking up there  🙂

This is just a few of the prayer meetings recorded in the Bible.  I hope reading about them has sparked your interest to believe what I said in the Soul H2O Devotion God Still Answers Our Prayers…

[tweetthis]When people get together and pray; God releases His power… His provision… and His presence #praymore[/tweetthis]

Here’s the list you can save to Study later, Pin on Pinterest, Save To your Device, or Print out for a constant reminder. 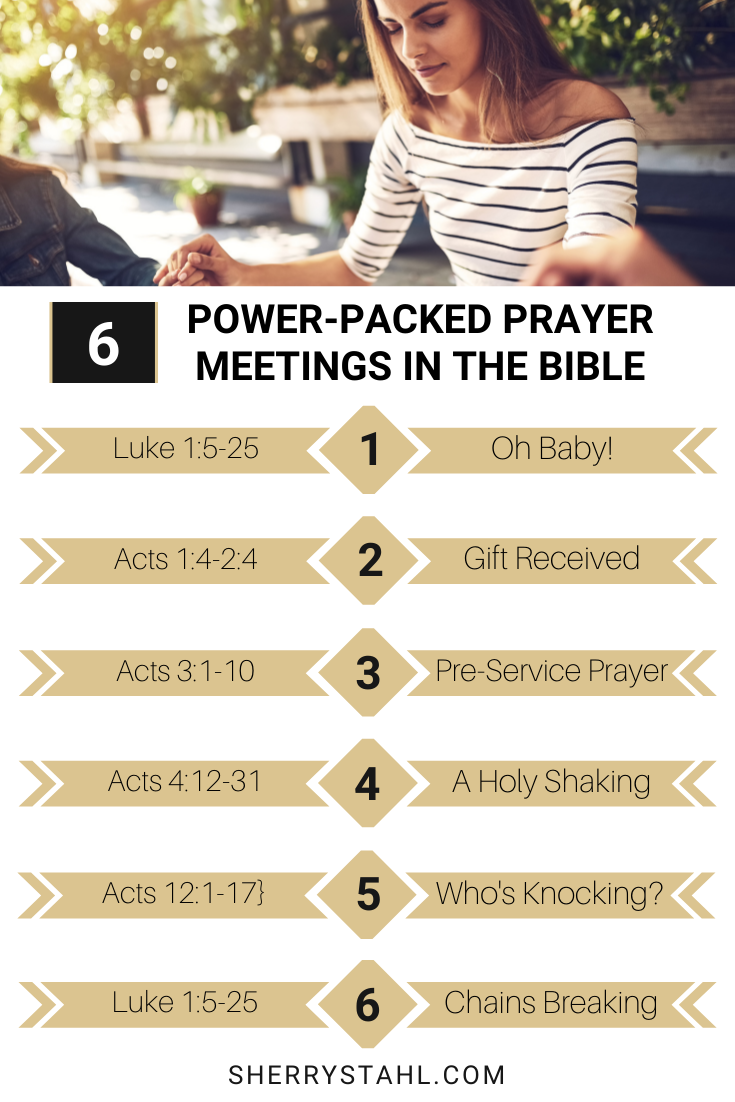 2 Comments on 6 Power-Packed Prayer Meetings In The Bible